Dana Lewis at Stanford Medicine X. Photo by Stanford Medicine X
In this interview, Dana Lewis — a pioneer of diabetes advocacy who founded the open source artificial pancreas system movement (#OpenAPS) — discusses her journey from patient to principal investigator (PI), what she hopes the future holds for the diabetes device industry, and opening pathways for patients to lead research.
By admin | Posted March 08 2018
54
2

Q: How did you get to “patient as principal investigator (PI)?”
My journey to becoming the principal investigator on the Opening Pathways project started with an earlier Stanford Medicine X project I worked on with Kevin Clauson, where he thought it was important to have patients involved, because it focused on diabetes and communicating with patients. I played a role on the research team, but I had a very specific one as a patient, not as an “official researcher.” I was excited by the idea of somebody seeking out patients, and being part of the project. So that was the starting point.

My opportunity to step into the PI role came about because a researcher saw a presentation I gave at the Quantified Self Public Health Conference in San Diego in 2016. Gary Wolf and I, along with other people in the audience, did some “performance art” — the setup was Gary starting a talk about the future delivering an artificial pancreas. I raised my hand, interrupted him, and then took the stage with the rest of the DIY Pancreas users at the conference. There were researchers in the audience who were blown away by the session. Afterwards, they surrounded me, asking, “What can we do to help? You’re obviously doing these really cool things, but how could we help you scale and move forward?” That was a big shift from the way patients are normally approached: “I’m doing this project and I need a patient perspective.” The shift to “how can we help” shifted my own thinking and vision, and led to someone from the Robert Wood Johnson Foundation (RWJF) saying,”You could potentially get a grant for this kind of work. Let’s continue the conversation.”

We then went through the marathon grant process — paragraph pitch, then a three-page application, followed by the full 10-page proposal — with feedback all the way. After the three-page application was accepted, RWJF said, “Look, what’s unique and innovative about this project is it’s Dana’s idea, it’s Dana’s work, the patient as the PI.” RWJF and my program manager said, “Let’s reboot and redo this with Dana as the lead PI.” My team said, “Absolutely. That makes sense. We have no problem doing that.” We started over. I remember the week before I submitted this huge application, I messaged the program manager saying, “You’re not expecting an academic style application from me, are you? This is going to be different for a number of reasons.” And he said, “No, if we have questions, we’ll ask you.”

A week before Medicine X 2017, I got the email saying I got the grant. And not only did we get the grant for this 18-month project, it started the next week!

Q: Was there a specific area of framing the project that was a challenge for you?
When we had to decide how to handle financial issues. My co-researchers at the time were at Arizona State University, so we decided to use ASU as the fiscal agent for the project. It didn’t make sense to have me do all the financial management, since that would mean I’d spend all my time doing something I had little expertise in. That was a clear decision point — “Okay, we’re going to document this so that future patient-PIs know they’re likely going to want to choose some kind of fiscal agent structure.” I made the conscious choice that this wasn’t going to be “the hill I die on,” and that handling the fiscal agent piece of the puzzle via an academic institution made sense in the context of the mission we wanted to accomplish.

The ultimate decision was that I would be a subcontractor so that I, as an individual, could get paid, but that wouldn’t take money away from the science and it wouldn’t set a precedent that an organization just absorbs the patient-PI. That can be a benefit, in some cases, but this whole project is about opening pathways, including the process of getting the grant and doing the science when it’s led by a patient. Anytime we have one of these pathway moments, I want to document it and say there is no precedent, here are possible options, here’s why we did what we did. Then, in future projects, when these questions come up, patient-PIs can decide what’s right for them.” 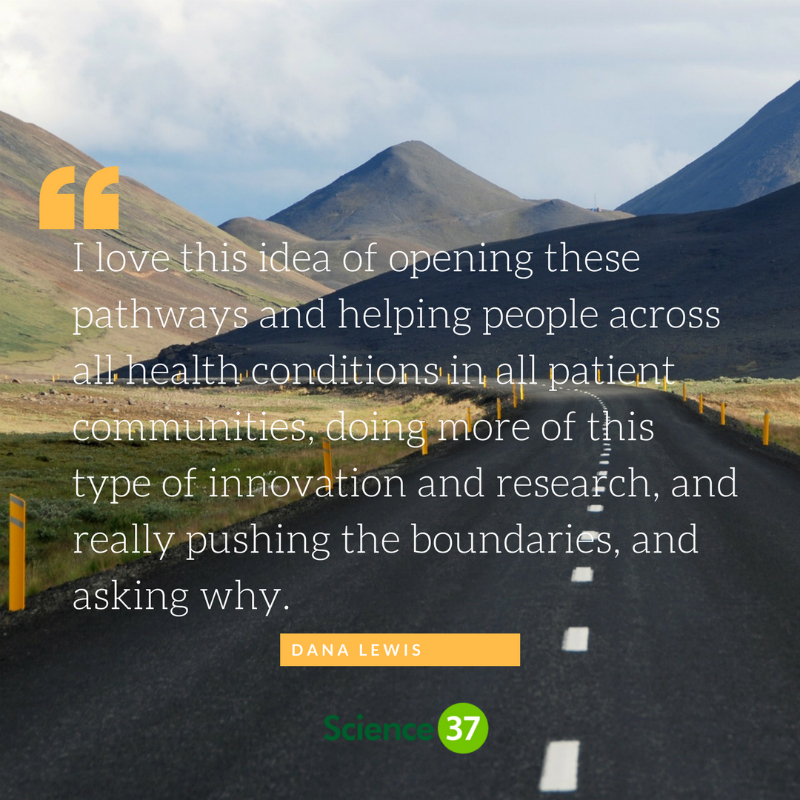 Q: How is the project funding going to be allocated?
What the project is funding is three things:

For example, let’s say there’s a cystic fibrosis community that’s working on building 3-D printed models of breathing treatment gear, and they’re trying to answer questions like, “How do I scale this? How do I get this out to the community? How do I work with an academic institution versus a for-profit company?” Our goal is to say, “Use this toolkit to help you move forward with that project.”

Q: How did your OpenAPS project lay the groundwork for you stepping into the PI role?
The person who created that first bit of code, John Costik, wanted to solve his problems of remote monitoring his child (who has diabetes). Using John’s code, I was able to build better alarms, smarter alarms, variable alarms, different alarm noises, and a host of other features. All because we approached the issue as,”Here’s a basic problem, let’s figure out how to solve it.”

A reporter recently asked me, “What’s changed?” Five, six years ago, I was told that louder alarms were coming on commercial devices. I sat down to lunch recently with somebody who is now using the first commercially available closed-loop system, so it’s the latest and greatest pump system that’s also a closed loop, and she was talking about how her son does not hear the alarm. It’s still important to be asking those questions, to be raising those things and saying “Here’s a really small problem that doesn’t seem like a problem to the companies, but is incredibly important to quality of life and to living.” Even if it feels small, have the courage to say that out loud and keep asking for real answers. Say “Okay, that’s great, but I want more. I want something different. What else can we do?” And snowball into an artificial pancreas. You never know what’s going to happen.

Q: What’s next for OpenAPS?
I want us to continue to make the algorithms better. We continue to innovate on the software and the hardware. I’m really not sure what comes next after this project, but I love this idea of opening these pathways and helping people across all health conditions in all patient communities, doing more of this type of innovation and research, and really pushing the boundaries, and asking why. I absolutely want to do that because I want to help other communities have this kind of life-changing innovation, and scaling of communities. I want to find more ways to get more people interested in this, whether it’s academic researchers or companies who want to partner with patient communities or get patients to scale their idea or come up with an idea or free themselves from the labels. There’s so much that can be done.

Q: What does the future look like for the diabetes device industry vis a vis DIYPS?
I’m very interested in getting the companies that make the medical devices to open their protocols and allow patients to use the latest and greatest technology, which right now happens to be DIY. At the same time, I want them to change their practices on how they evolve their technology. Most of these companies were built decades ago, and they haven’t evolved their business practices in terms of technology development, in terms of their speed of doing clinical trials, in terms of how they interact with the FDA. I would want to push them to do more, and to do it faster.

This story has been edited for length and clarity.