Photo of HeLa cervical cancer cells by HeitiPaves / iStock / Getty Images Plus
Medical science and clinical research require trust. The story of Henrietta Lacks is an object lesson in how betraying trust can impact the entire scientific community.
By | Posted April 13 2018
208
8

In Part 1 of this 2-part series, we introduce you to Henrietta Lacks, whose immortal cells still grow in labs around the world, helping foster medical breakthroughs from the polio vaccine to AIDS treatments. In Part 2, we talk with her grandson, David Lacks Jr., about the impact of his grandmother’s story on the Lacks family, and how their experience illustrates the importance of trust in clinical research to the people who participate in clinical studies and trials. “Informed consent” isn’t just a checklist, it’s a sacred contract.

“Henrietta’s cells have now been living outside her body far longer than they ever lived inside it.” ~ Rebecca Skloot, “The Immortal Life of Henrietta Lacks”

Trust in Medical Research
Trust is a critical factor in medical research. The patient has to trust the research team to give them all the information needed to decide whether to participate in a clinical trial or study, and to trust that the team will honor their participation by keeping them informed about risks and side effects during that trial. The clinical team must trust the patient to share all relevant personal health information with them.

I met someone whose family is central to a story that blew the doors open on the concept of “trust in research” — David Lacks, Jr, the grandson of Henrietta Lacks. If you don’t know who that is, I’ll give you the full data dump in a minute. First, let’s talk about trust, and clinical research. Then we’ll get to the dramatic story of Mrs. Lacks.

When thinking about the “trust” metric in clinical research, Shakespeare’s line in Timon of Athens, “I wonder men trust themselves with men,” springs to mind. Until recently, that metric amounted mostly to “sign here” and “take this” — followed by testing and interviews about what happened to the patient after treatment. This approach did not lead to much “patient engagement” or “patient centricity” in any part of medicine; it’s been a very paternalistic, top-down process. Patients weren’t part of the research process other than as test subjects. “Subject” in clinical research is defined as “a living individual about whom an investigator conducting research obtains information,” which sounds very hamster-on-wheel. In some cases,  research participants weren’t even told that they were test subjects — which is why Henrietta Lacks’ name has lived so much longer than she did. 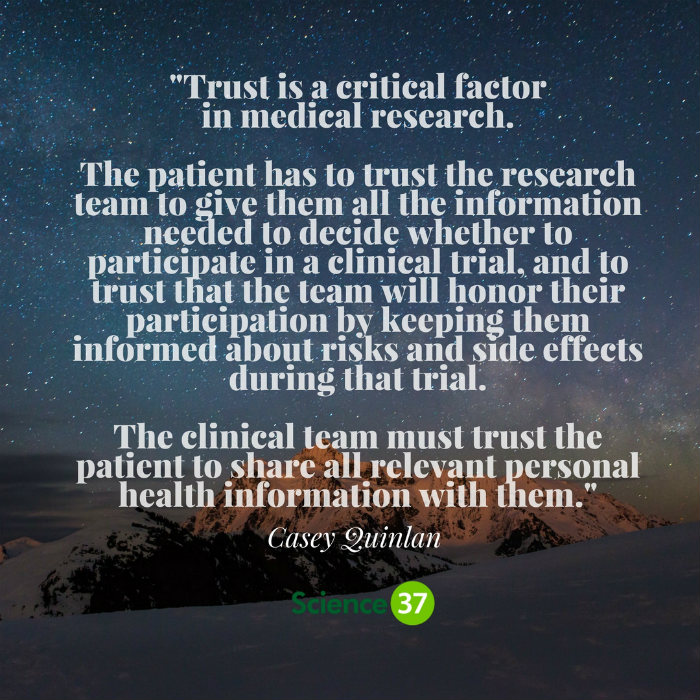 Henrietta Lacks: Scientific Pioneer, Without Her Permission
In 1951, Henrietta Lacks, the 29-year-old wife of a Bethlehem Steel worker, gave birth to her fifth child at Johns Hopkins Hospital — in the segregated ward, since she was black — in Baltimore, Maryland. She had a severe hemorrhage after the birth, and a biopsy showed that she had cervical cancer. She was treated with radium tube inserts at the hospital, which also took tissue samples from her cervix without her knowledge or permission. Lacks died on August 8, 1951, of metastatic cervical cancer.

Her tissue cells, however, attained immortality as HeLa, a cell strain that has been in constant use since 1951. These cells were remarkable in their ability to live and reproduce indefinitely, unlike typical cell lines that would last a few weeks, at best.

The doctor who took her cells — George Gey — first grew HeLa cells in the lab and distributed them to other scientists to use in their experiments. Scientists have used HeLa cells to develop the polio vaccine, and these cells have furthered our understanding of cancer, HIV/AIDS, and cells in general. HeLa cells are still in wide use today to grow viruses and to test anti-tumor medicines. They were the first human cells to be successfully cloned (in 1955), and to date, HeLa cells have been part of more than 11,000 patents.

But it wasn’t until the 1970s that the Lacks family knew anything about Henrietta’s immortal cells, in use in medical research across the globe, when the family was asked for blood samples to help researchers determine if some of the HeLa cell lines had been contaminated by other cell cultures. To say that the family was displeased at discovering that Henrietta’s cells had been taken, and used, without any permission, would be putting it mildly. They had no idea that their mother’s cells lived on across the globe, and when they realized how much those cells had contributed, and were still contributing, to science — along with the financial rewards possible through those 11,000 patents — they were understandably angry. It’s difficult to assess exactly how much revenue was generated around the world via scientific breakthroughs made possible by HeLa cells, but vials of HeLa cells sell today for up to $10,000. Meanwhile, in the early 2000s, Sonny, the middle son in the Lacks family, was $100,000 in debt after heart bypass surgery.

The Impact of Rebecca Skloot’s “The Immortal Life of Henrietta Lacks”
Interest in the story of the woman behind so much medical research, whose cells were likely to live far longer than she ever had the chance to, rose over the next 30 years. HeLa cells, the cancer cells harvested from Henrietta’s body before and after her death, have been multiplying in labs across the world since the early ‘50s. However, it wasn’t until 2010 — with the release of Rebecca Skloot’s bestselling book, The Immortal Life of Henrietta Lacks, that the research community took meaningful steps to honor the contributions of Henrietta and the Lacks family, and to compensate them for those contributions. Smithsonian Magazine did an interview with Skloot that took a deep dive into her experiences putting the book together, including how challenging it was to win the trust of the Lacks family after the decades when their mother’s cells made medical history, and no one knew Henrietta’s name, or the huge part she played in a host of medical breakthroughs via her “immortal cells.” Skloot went on to establish a foundation to “provide financial assistance to individuals in need, and their families, who have made important contributions to scientific research without personally benefiting from those contributions, particularly those used in research without their knowledge or consent.”

After her book started marching toward the top of bestseller lists, Johns Hopkins published a long piece in its own magazine, saying, “Though the science and history in Skloot’s book are fascinating, they are not what has made it a national best-seller. What has resonated with readers are the interwoven narratives of Henrietta Lacks’ sad life and her daughter Deborah’s pursuit of knowledge about the mother she never knew.”

Additionally, text on the front cover of Skloot’s book reads, “Doctors took her cells without asking.” The inside flap continues, “Henrietta’s family did not learn of her ‘immortality’ until more than 20 years after her death, when scientists investigating HeLa began using her husband and children in research without informed consent. And though the cells had launched a multimillion-dollar industry that sells human biological materials, her family never saw any of the profits.”

Oprah Winfrey starred in the book’s filmed adaptation which premiered on HBO in 2017.

Continue to Part 2, where we talk about the impact of Henrietta Lacks’ story with her grandson, David Lacks Jr.