Photo by ArisSu / iStock / Getty Images Plus
Science is a progression of ideas and discoveries. The early adopters make headlines, but wide cultural change in medicine and clinical research only happens over the long haul.
By | Posted April 11 2018
7
1

A discovery is said to be an accident meeting a prepared mind.
— Albert Szent-Gyorgyi, 1937 Nobel Laureate in Physiology or Medicine.

The Scientific Aha Moment and the Long Tail
“The long tail” is a term used in statistics and marketing to describe the observable spike of early adoption of something new, followed by a long echo — the tail — of adoption at a slower rate across a wider or longer distribution. Think the latest iPhone, or a new medicine. Early adopters will storm the doors to get their hands on the new thing, lining up outside the Apple Store for the latest iPhone, or haunting news headlines for new treatments for their condition. But early adopters are a minority of humans. Most people who might ultimately be interested in that new thing will be coming to it after social or scientific proof — seeing other people using it successfully — that makes having that new thing desirable. If you’re curious about the science of the “long tail,” also called the diffusion of innovations, you can start here.

A scientific “a-ha moment” does not necessarily mean that what you just discovered will deliver immediate answers to a problem like Parkinson’s disease. But every one of those discoveries becomes a brick in the wall of “proof of theory” that is scientific research. The scientific method (systematic observation, measurement, and experiment; and the formulation, testing, and modification of hypotheses) and peer review (evaluation of work by others in the same field) have both worked to advance, and to occasionally muddy the waters of, scientific advancement. Peer review — first codified in Ethics of the Physician by al-Rawhi in the 9th century — is something that is itself the subject of contentious argument in the scientific community today. Scientific rigor is the gold standard in the quest for discovery; risking the trustworthiness of scientific evidence via P-hacking, or manipulating data to make it prove a hypothesis, is the enemy. 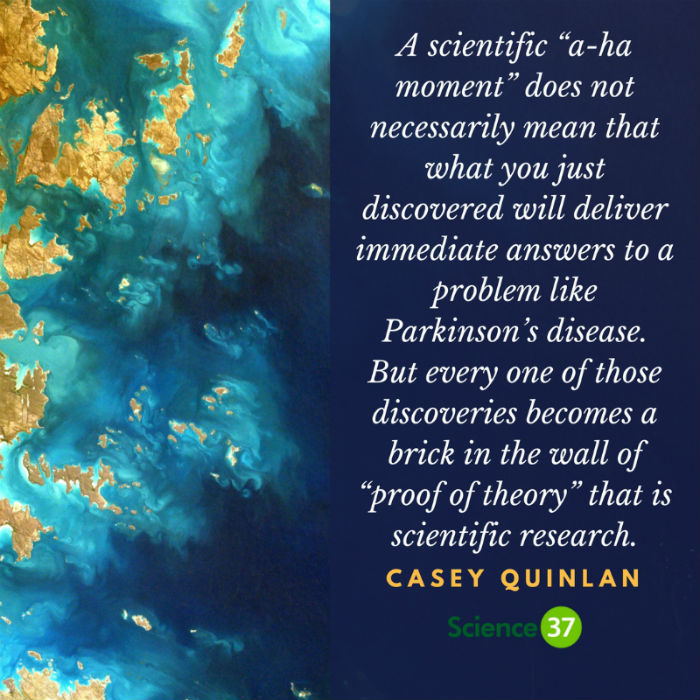 Science Is Humanity’s Effort To Sustain Itself
Humanity has always looked for solutions to disease. Hippocrates was the first to codify medicine as a science, instead of the magical experimentation that “medical” care amounted to before he and his acolytes produced the Hippocratic Corpus — the first medical text — in the 4th century BC. It then took over two millennia to get from Hippocrates to Giacomo Pylarini’s first smallpox inoculation in 1701, and another ninety-five years passed before Edward Jenner perfected a method for smallpox vaccination. That’s a pretty long tail.

Some periods of scientific discovery are rapid-cycle. The latter half of the 20th century included fast breakthroughs like Jonas Salk’s polio vaccine. When the vaccine was proved to be safe and effective, via one of the largest clinical trials in history, church bells around the world rang in celebration when the study’s results were announced. Getting a polio shot in 1955, almost immediately after the April 12 announcement of its safety, meant that millions of children around the world — including me — would be safe from a disease that had become a modern plague.

Breakthrough Science Threatens the Status Quo
20th century medical science was very friendly toward the idea of scientific breakthrough. The longer view of the history of discovery, particularly in medicine, shows a persistent thread of emerging new ideas, punctuated by “a-ha!” peaks when something remarkable emerged. Some of those discoveries have been welcomed by the wider scientific community; others have been rejected, in some cases furiously.

Take for example Ignatz Semmelweis’ identification, in the mid-19th century, of puerpural fever (also called childbed fever), which caused the deaths of 10% of women giving birth in the Vienna hospital where he was chief resident. He realized that the disease could be prevented if obstetricians washed their hands with a chlorinated lime solution between deliveries. He was laughed out of the hospital, and eventually out of his profession, dying a few years later in a mental hospital, before the work of Louis Pasteur and Joseph Lister proved his theory about the spread of infection via the bacteria-laden hands of surgeons.

Science Is a Team Sport
Here’s where you come in — since you’re reading this, I think it’s safe to assume you’re interested in science, and in turning the long-tail in medical advances into a shorter adoption curve. It’s important to use scientific rigor — you can call it “fact checking” — on our own search for discoveries we can share with our communities. Being able to spot the real potential of a scientific breakthrough, or to identify it as possibly-P-hacked, requires some science literacy and a good eye for what I call “Google junk” — the stuff that seems too good to be true, but is at the top of the search results, anyway.

Do some reading about the scientific method. Make fact-checking stories about scientific breakthroughs part of your regular online activity — I recommend subscribing to Retraction Watch, Sense About Science USA, and Health News Review, as a great way to start. Let your friends, family, and community know how to find the real 411 on science and new discoveries. That’s how we’ll keep that long tail tracking — wagging? — and even help accelerate adoption and more discovery. Clinical research — it takes a village.